Bihar is located in the eastern part of India. The state is surrounded by Nepal in the north, West Bengal in the east, Uttar Pradesh in the west, and Jharkhand in the south. Modern Bihar is divided into two halves by the river Ganga, and thus has the benefit of being located entirely on the fertile Gangetic plain.

Bihar’s economy is fundamentally agricultural and rural with about 25% of the state GDP being contributed by the agriculture sector (including forestry and fishing). The state is located on the flood plains of a major river that makes agriculture easy.

Agriculture is the key to the overall development of the State economy. Agriculture employs 77% of the workforce in Bihar, as a percentage this is significantly higher than the national average. The soils are light, alluvium - derived soils mostly khaddar (recent alluvium) and hanger (Old alluvium) 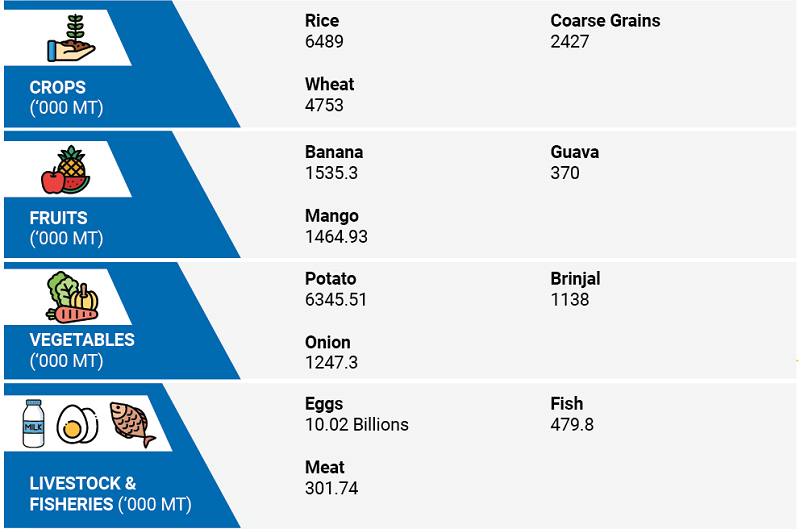 Bihar is well endowed with natural resources like land and water, vital for agriculture and crop production. The soils are predominantly Alluvial (Gangetic) or Swamp or Terai, rich in nutrients like nitrogen, potash, and phosphorous. The state has surplus water resources with the potential for double and multiple cropping. These need to be tapped. The production levels of major fruits in 2011-12 were mango (12.41 Lacs MT), guava (2.45 Lacs MT), litchi (2.36 Lacs MT), and banana (15.80 Lacs MT). Bihar is the largest producer of litchi, the third largest of pineapple, and the fourth-largest of mango in India.

Bihar has the following marketing facilities in the state:

There are several factors that favor the agriculture sector in Bihar. The state is now uniquely positioned to utilize its rich untapped natural resources such as fertile soils and abundant water. More importantly, it can avail of the benefits of increasing stress on the food processing sector at the national level. Bihar ranks 11th of the 15 major states in terms of social and economic infrastructure. Annual Survey of Industries reveals that only about 1,500 industries are operating in the state (2003–04) or 1.13 percent of the total industries all over India. Food processing, dairy, sugar, manufacturing, and healthcare are some of the fast-growing industries in the state.

The below Figures shows the statistics and Map representation of Processing Clusters in Bihar: