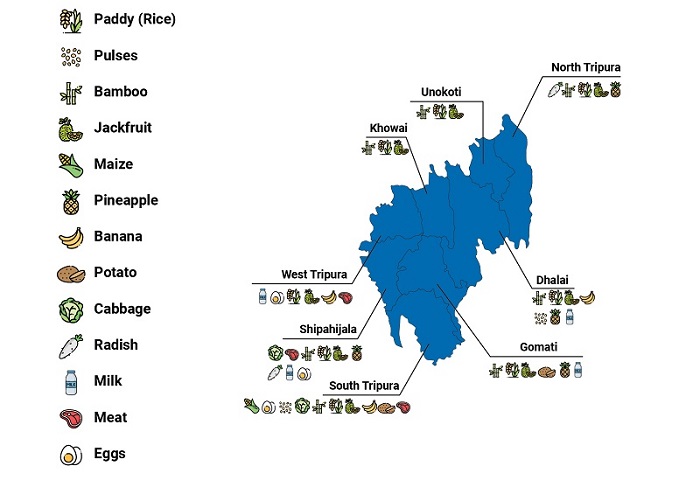 Tripura is one of the seven states in the northeast. Tripura acts as a gateway between Northeast India and Bangladesh. The state shares an 856-km international border with Bangladesh. This offers enormous potential for international trade. Tripura is endowed with rich and diverse bamboo resources and is the largest bamboo producing hub in India.

Tripura possesses huge potential yet relatively unexplored sectors such as organic spices, biofuel, and eco- tourism. It is rich in natural resources such as natural gas, rubber, tea, and medicinal plants. The state is also known for its vibrant food processing, bamboo, and sericulture industries. Tripura is one of the largest natural rubber producers in the country.

The economy of Tripura is basically driven by agriculture. About 42% of its population depends on it for their livelihoods. The Contribution of Primary sector (agriculture and agriculture allied sector). The Gross State Domestic Product (GSDP) was about 26% in 2014-15. Pineapples (Kew and Queen Variety) and Oranges (Jampui Oranges) renowned for their unique flavor and organic nature of produce. 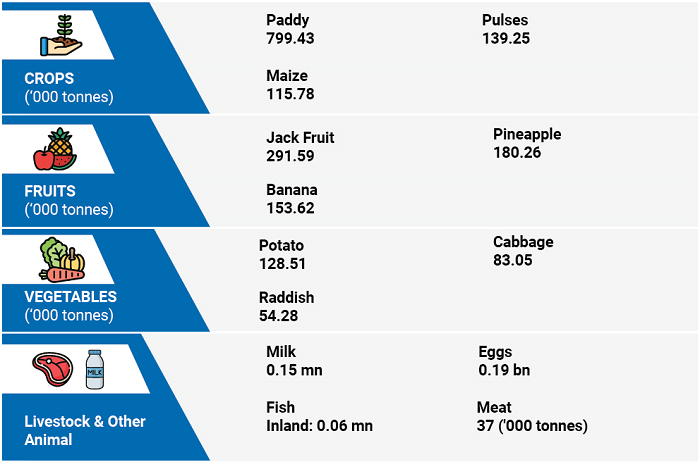 In Tripura, 2874 farmers were mobilized till March 2017 and there are 4 registered FPOs. As per the Annual Survey of Industries 2014-15, there are 75 registered food processing units in the state. The Tripura Agricultural Produce Markets (Amendment) Act, 1983 has been enacted for the establishment of the Tripura Agricultural Produce Market Board and a subsequent amendment was proposed for the constitution of the Market Committee of Regulated Markets to increase the number of members. The Tripura Agricultural Produce Markets (Administration) Rules, 1985, was framed to allocate powers to the Marketing Board and Committees. In the regulated markets Paddy and Banana are notified as transactional commodities. Paddy is admissible in the regulated markets in husked or raw form for transactions. These transactions are made by open regulations between the buyers and the sellers.

In Tripura, there are more than 600 (Daily, Weekly, Biweekly) agricultural markets of different sizes out of which 31 are daily markets. Each small scale primary rural market (about 554 in number) caters to 2-3 surrounding Gram Panchayats. There are about 84 major wholesale markets in Tripura including 21 regulated markets. (Source: Economic Review 2015-16).

The state has favorable climatic conditions for the cultivation of various fruit and horticultural crops. The state’s pineapples and oranges are known for their unique flavors and organic nature. It has set up a modern food park near Agartala to boost growth in the food processing sector & an agri-export zone for pineapples. The state also has potential in the meat-processing sector.