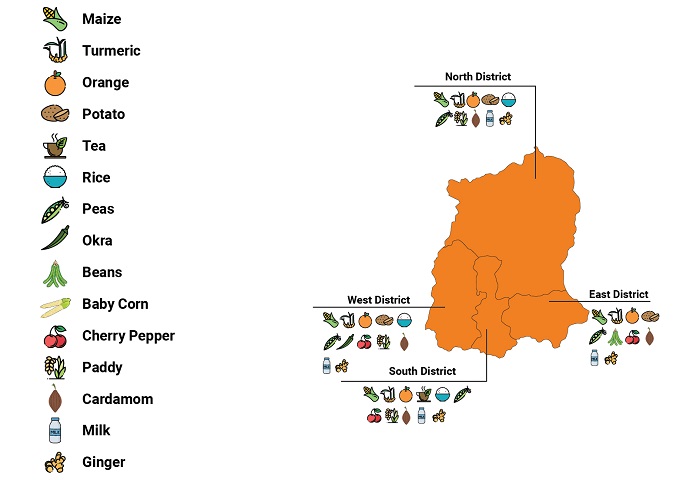 Sikkim is one of the fastest-growing states in India. The state has favorable agro-climatic conditions, which support agriculture, horticulture, and forestry. Sikkim got certified as the first fully organic state in India by the Central Ministry of Agriculture and Farmers’ Welfare as well as other recognized agencies of the country. It is home to around 5,000 species of flowering plants, 515 rare orchids, 60 primula species, and 36 rhododendron species. This makes it one of the leading states in the northeast in terms of production and supply of cut flowers to mainland consumer markets. The state is also considered as a huge cardamom epicenter of the world, producing around 80% of large cardamom in the country.  According to the Global Childhood Report 2019, Sikkim was the best state under Protective Contexts.

Agriculture is the most important part of the socio-economic pattern in Sikkim, and it’s also the primary occupation of the inhabitants of the state. Organic farming in the state has been a traditional way of farming adopted by farmers for ages. Due to the unavailability of assured irrigation, farmers practice a rain-fed farming system with an integrated approach and therefore, an integrated farming system is predominant in the state with agriculture, horticulture, and animal husbandry in impeccable coordination. Sikkim has a rich green cover with abundant plant species as a result the soil is rich in organic matter content and makes the organic conversion easier.

The topography and the climatic conditions of Sikkim are highly favorable for agriculture and this is the reason why Sikkim witnesses a high yield every year.

There are five agro-climatic zones in the state as shown below:

A major strength of Sikkim’s food processing industry lies in the following:

The major crops of the state are maize, rice, buckwheat among cereals, Black gram (Urad), and rice bean among pulses, soybean, and mustard among oilseeds. The main horticultural crops are orange & pears among fruits, ginger, cardamom, turmeric, and cherry pepper among spice crops, cole crops, peas & beans, tomato, potato among vegetable crops. Besides, the production of potato & pea seeds and off-season vegetable cultivation at high altitudes is done extensively. Of late, the cultivation of flowers such as cymbidium, rose, gerbera, anthurium, lilium, etc. is generating good income for farmers and a large number of farmers have adopted floriculture as a commercial venture.

The state's economy is largely agrarian, based on the terraced farming of rice and the cultivation of crops such as maize, millet, wheat, barley, oranges, tea, and cardamom. Sikkim produces more cardamom than any other Indian state and is home to the largest cultivated area of cardamom

Sikkim has the following marketing facilities in the state: