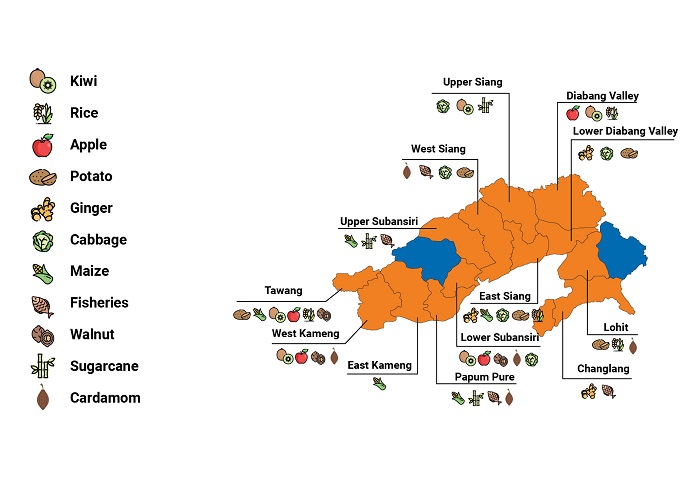 Arunachal Pradesh is the largest among the seven states located in the northeast of India with an area of 83,743 sq. km. The state's economy is largely agrarian, based on the terraced farming of rice and the cultivation of crops such as maize, millet, wheat, pulses, sugarcane, ginger, oilseeds, cereals, potato, and pineapple. The state has considerable mineral reserves that offer huge potential. The state’s hydropower generation potential is estimated at 50,328 Megawatt (MW).

The state’s diverse topography offers ample opportunities for non-timber-based industries such as bamboo, cane, and medicinal plants. Horticulture has a vast potential, owing to good agro-climatic conditions and topography, for the development of varied varieties of fruits and vegetables.

Arunachal Pradesh’s economy is largely agrarian, based on the terraced farming of rice and the cultivation of crops such as maize, millet, wheat, pulses, sugarcane, ginger, oilseeds, cereals, potato, and pineapple. About 80% of the population living in rural areas and 62.2% of the total working population are dependent on agriculture for their livelihood.

The state gets as much as 500 centimeters of rainfall and this accounts for a large number of rivers and lakes in the region apart from extensive forests which have induced the people to adopt the 'Jhum' form of cultivation in which a select area of the forests is burnt and used for cultivation. In the following years, the farmers shift to another forest plot which leads to the cultivation being called shifting cultivation. About 53% of the total cultivated area is under Jhum and the rest under permanent cultivation.

Arunachal Pradesh is a hilly state with deep valleys and high mountain peaks traversed by a number of rivers and rivulets, has varying agro-climatic zones which can broadly be classified as:

With less rainfall, cool temperature is ranging from 0-22 degrees Celsius. The elevation ranges from 1,800 m to 2,500 m MSL

A major strength of Arunachal Pradesh’s food processing industry lies in the following: 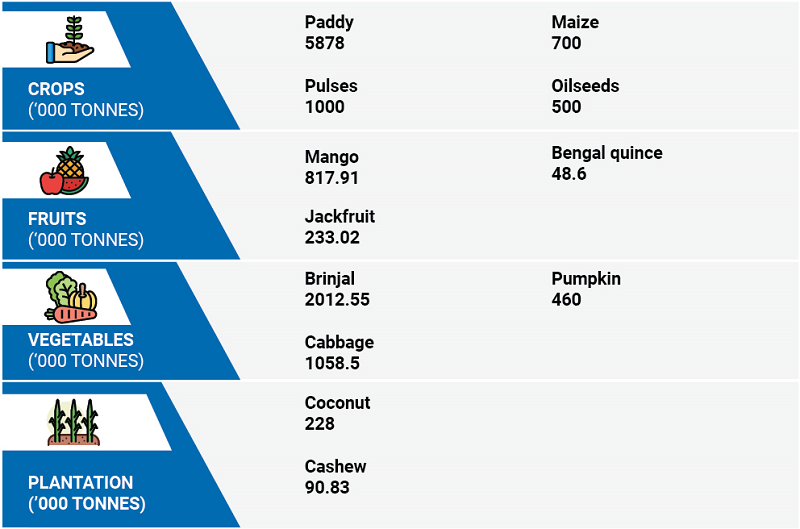 Arunachal Pradesh has the following marketing facilities in the state:

One cold storage (capacity 5000 MT) in the state established under the National Health Mission.

Agriculture Marketing is governed by the Agricultural Produce Marketing Committee (APMC) Acts, which are administered by respective State Governments. In order to keep pace with the changing production pattern and growing marketable surplus, the Government advocates the development of an adequate number of markets equipped with modern infrastructure, with increased private sector participation and the development of other marketing channels like direct marketing and contract farming, etc.

The reforms taken up by the Government that is applicable to Arunachal Pradesh are given below: