Punjab, one of the northernmost states of India, is bordered by the Pakistani province of Punjab to its west, Jammu & Kashmir in the north, Himachal Pradesh in the northeast, Haryana in the south and southeast, and Rajasthan in the southwest.The confluence of five rivers makes Punjab’s agricultural land rich and productive. Punjab is the source of 95% of India’s woolen knitwear production, 85% of India’s sewing machine production, and 75% of India’s sports goods production.

Punjab is known as the ‘Breadbasket of India’ and also led to the first Green Revolution in the country. By 2025, it is expected that the state will be among the leading producers of non-food grains as well as exporter of various agri-products.

Punjab has been famously considered the food bowl of India. With a contribution of more than 40% of the central pool of wheat and 26% of rice, Punjab has an essential stake in staple foods in India. Agriculture continues to be a major contributor to the economy with about 21 % of GSDP being contributed by Agriculture and allied sectors.

Agriculture and allied fields such as dairy, fisheries, and animal husbandry are major sources of employment in Punjab. These sectors play an important role in the economy of Punjab. Punjab is also known for high production as well as high productivity of the milk. Sahiwal, one of the best Indian indigenous breeds of a cow with the highest milk yielding capacity is from Punjab. 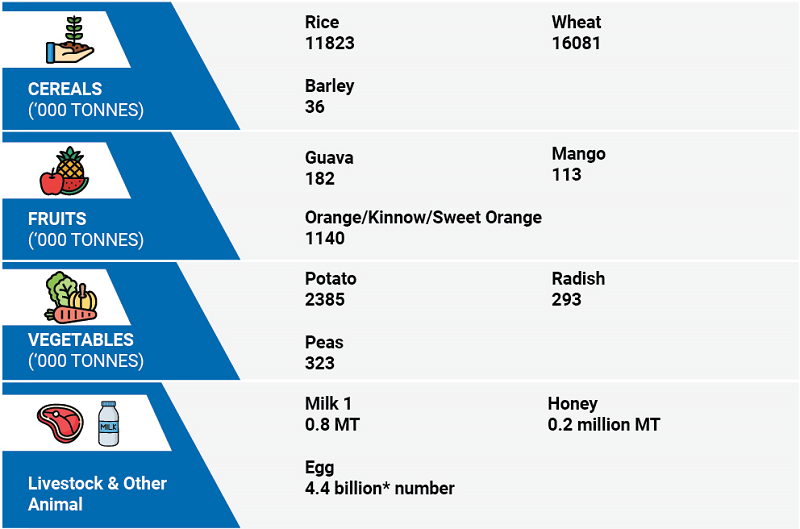 Punjab has the following marketing facilities in the state: