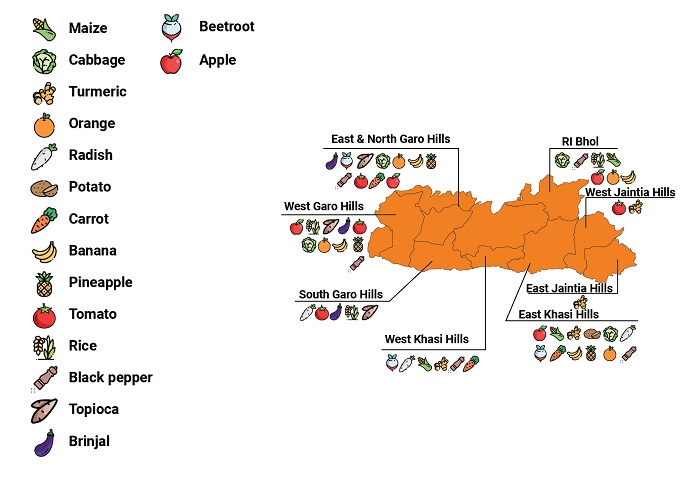 Meghalaya, a name that literally translates to ‘the abode of clouds’, is an Indian North-Eastern state that’s one of the most beautiful and serene places. Though the state mostly has hilly areas, it also has numerous rivers and diverse soil types. Being the wettest region of India, about 70% of the state is forested.

Meghalaya, with an average annual rainfall of 1,150 cm, receives the highest amount of rainfall in the country. The diverse range of soil types, including red-loamy and laterite, support various agricultural crops like rice, maize, pulses, oilseeds, cotton, jute, and mesta. The state has achieved success in the cultivation of non-traditional crops like tea, cashew nuts, oilseeds, tomato, mushroom, wheat, etc.

Agriculture is the main occupation of the people of Meghalaya. About 83 % of the total population of the state depends on agriculture for their livelihood.

The ethnic communities of Meghalaya follow two major types of agricultural practices such as shifting cultivation or slash and burn agriculture, and terrace or bun cultivation. Shifting cultivation is practiced in and around forests, and terrace cropping is practiced in valleys and foothills, and inside plantation forests. A common irrigation technique employed in the state is the Bench Terrace Irrigation practice where the hill streams are tapped as soon as they emerge from the forests and the water is channeled to accommodate a series of terraces. Bench terracing is an important conservation measure for valleys and hill slopes. In bench terrace agriculture practice under rain-fed conditions, topo-sequence crops such as maize, bean, and potato are planted on upper slopes, and crops requiring more water such as rice and jute are grown on lower slopes. The excess runoff from the upper portion of the slope is nutrient-rich, utilized for the lower hill crops.

The topography and the climatic conditions of Meghalaya favor agriculture, horticulture, and forestry. Meghalaya is endowed with abundant natural resources in terms of flora, fauna, medicinal plants & forests, and the state offers significant avenues for investment.

There are three agro-climatic zones in the state as shown below:

A major strength of Meghalaya’s food processing industry lies in the following: 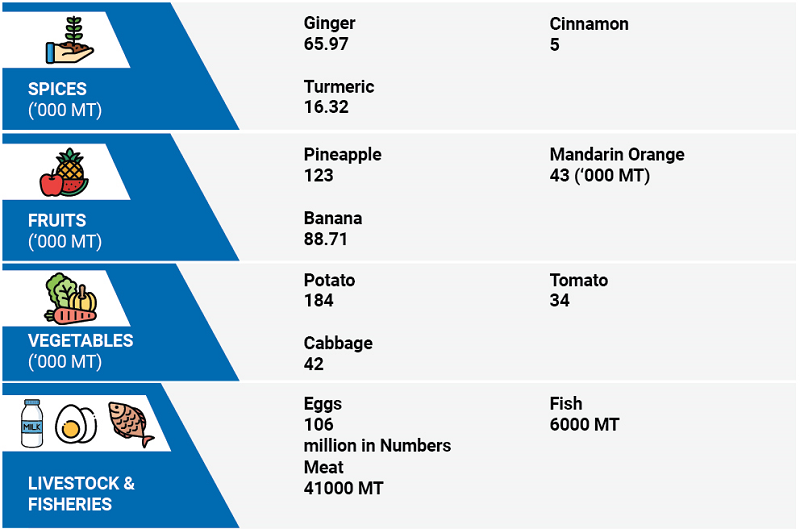 Meghalaya has a long history of growing horticultural crops. Potato, Pineapple, orange, turmeric, ginger, and areca nut are grown traditionally and besides these crops, a variety of new crops like tea, cashew, and strawberry have been introduced. Most of the land used for these crops is not suitable for traditional agricultural crops like cereals, pulses, oilseeds, and fibers. With the introduction of the Horticulture Mission for North Eastern & Himalayan States, a lot of area expansion has taken place.

Meghalaya’s turmeric considered one of the best in the world, as it contains 7.5% of curcumin

Farmers markets, implemented during the 11th Plan, will be expanded to cover more areas within the State during the 12th Plan, where farmers market will be tried on the hub and spoke model – large central markets and satellite markets in their hinterland. The effective functioning of farmers' markets depends to a large extent on the flow and easy availability of market-related information to enable farmers to take proper and profitable market decisions based on reliable real-time data. A market information system is thus a crucial and urgent intervention that would be made in order to make Farmers Markets viable and vibrant entities leading to the evolution of a much more transparent marketing system.

Meghalaya has the following marketing facilities in the state:

Cluster approach to strengthening the existing concentration of crops. For each crop post-harvest management and value chain management will be given emphasis so that additional income and employment will be generated in the State itself