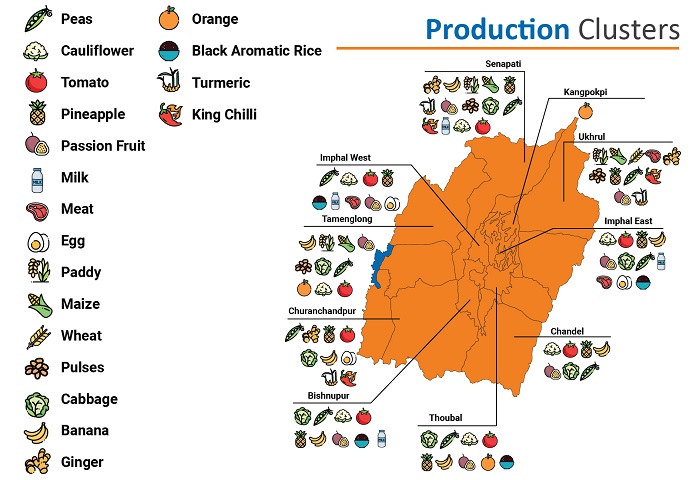 The word Manipur means “a jeweled land” and the state was described as the “Jewel of India” by the late Prime Minister Pandit Jawaharlal Nehrunestles deep within a lush green corner of North East India. In terms of area, Manipur ranks twenty-third among the states of India and fourth in the northeastern states. Imphal is the capital city of Manipur. About 48 km. away from Imphal towards the south-east lies the Loktak Lake, the largest freshwater lake in the North-Eastern Region of India. This lake which covers an area of 216 sq. km. is the largest natural source of fish supply which is one of the important food items of the people of the state. Manipur acts as India's "Gateway to the East" through Moreh and Tamu towns, the land route for trade between India and Burma and other Southeast Asian countries. Manipur has the highest number of handicrafts units and the highest number of craftspersons in the northeastern region of India.

A major portion of the state is covered by hill ranges. Topographically the state is divided into three major regions: a) Hills, b) Imphal Valley, and c). Barak Basin. Manipur may be characterized in two distinct physical regions - an outlying area of rugged hills and narrow valleys and the inner area represents the features of flat plain topography with all associated landforms.

The agriculture sector has a vital place in the economy of the state. It contributes a major share to the State Domestic Product. However, the performance of agriculture in the state mainly depends on timely rainfall and weather conditions. Permanent cultivation is generally practiced in the valley districts while terrace cultivation is practiced in some pockets of the hills where jhuming or shifting cultivation is widely adopted in most of the hills. Rice is the staple food and is grown in hill and plain areas of Manipur. The development of commercial crops like cotton, kabrangchak, oilseeds, and sugarcane are very essential for enhancing the growth of agro-based industries in the State of Manipur.

Cultivation Areas of Major Agricultural Crops In The State

Gifted with suitable agro-climatic conditions, Manipur is home to various food and cash crops, fruits, and vegetables. The soil is fertile and suited more particularly in the hills for growing different fruits and vegetables. Organic farming is the most sought-after practice in the hill areas.

Pineapple, passion fruit, and mushroom naturally grow. They are also commercially cultivated. Bamboo shoots and ginger are available in plenty. Manipur has vast potentials for the commercial plantation of fruits like lemon, lime, orange, pineapple, banana, passion fruit, amla, olive, figs, mandarin, etc.). The quality of pineapple (both Queen and Kew varieties) is distinct with unique taste and flavour. So far, identified potential area for cultivation is estimated at 2,77,064 Hectares. Out of this, about 70,499 Hectares are covered under different crops.

Cultivation Areas of Major Horticulture Crops in the State

Gifted with suitable agro-climatic conditions, Manipur is home to various food and cash crops, fruits, and vegetables. The soil is fertile and suited more particularly in the hills for growing different fruits and vegetables. Organic farming is the most sought-after practice in the hill areas. Pineapple, passion fruit, and mushroom naturally grow. They are also commercially cultivated. Bamboo shoot and ginger are available in plenty

The marketing of agricultural produce in Manipur has not been systematically organized. The lion's share of the consumers' rupee goes to the pockets of innumerable middlemen working in between the producer and the ultimate consumer. The agriculturists of Manipur are generally the persons of small means. Their holdings are small and scattered. As such, they have got very little quantity of agricultural produce available individually as a marketable surplus to be disposed off. Obviously, it becomes uneconomical to carry the small quantity of products to the assembling markets located at distant places where middlemen operate at different stages. Under the prevailing practice in the state, farm produce is collected from the producers in the interior villages and are brought to a central point, which is the assembling center, by the womenfolk.

The existing area under cultivation of different crops in Manipur is 2,85,000 hectares as against the available potential area of 3,25,500 hectares. Rice, wheat, maize, oilseeds, potato, and sugar cane, etc. are the main cash crops in the State. Among these crops, the cultivation of the paddy is the largest, both in the plains and hills, and covers 82% of the total cultivated area. Besides the numerous varieties of local rice which are all unique in taste, there are two types that are specific to the State with distinctive scent and flavour and are preferred for Chak-hao pudding preparation Chak-hao-Poireiton (dark violet) and Chakhao (white).