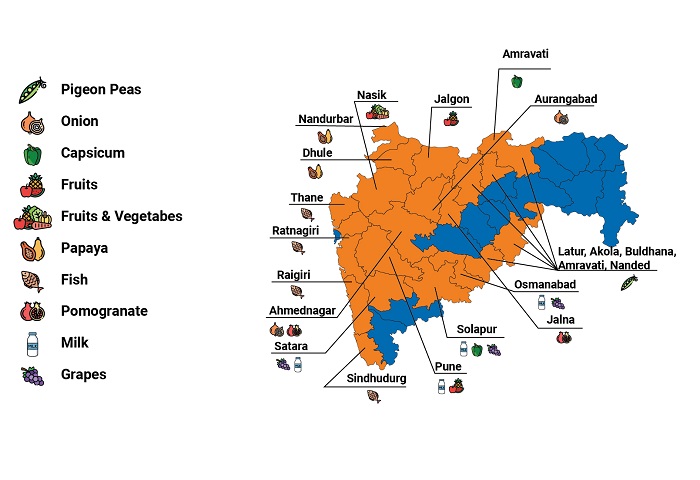 Maharashtra is situated in the western region of the country along a coastline stretching nearly 720 km along the Arabian Sea. It is surrounded by Gujarat to the North West, Madhya Pradesh to the north, Chhattisgarh to the east, Telangana to the southeast, Karnataka to the south, and Goa to the south west. Maharashtra’s gross state domestic product (GSDP) accounted for 12.98% of India’s gross domestic product (GDP) in 2015-16, the highest among all states. Maharashtra is the third largest state in area and second-largest state in the population of India. The 45% population of the state is urban. It is the most industrialized state in India and has maintained its leading position in the industrial sector in the country. The state is a pioneer in small scale industries and boasts of the largest number of special export promotion zones. Maharashtra has a large base of skilled and industrial labor, making it an ideal destination for knowledge-based and manufacturing sectors.

Maharashtra’s economy is primarily agricultural and rural. Agriculture is a major occupation of the people in Maharashtra. Both food and cash crops are grown in the State.

Sahyadri, the hilly ranges running parallel to the coast at an average elevation of 1,200 meters (4,000 ft.) divides Maharashtra into two parts geographically, (i) Konkan coastal plains, 50–80 kilometers in width and around 720 km in length to the west and (ii) Deccan Plateau (Western Ghats) to the east. The Konkan is dotted with paddy fields and coconut gardens. The Western Ghats form one of the three watersheds of India, from which many South Indian rivers originate, forming one of the greatest river basins in India.

A major strength of Maharashtra's food processing industry lies in the following: 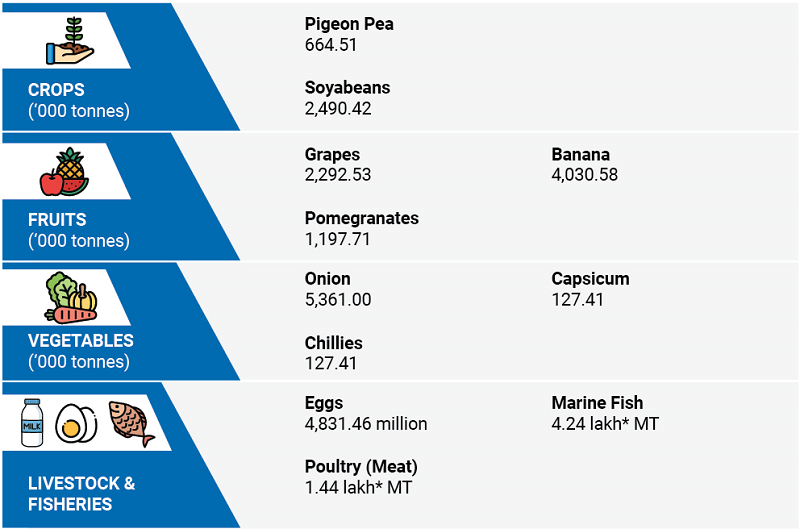 Maharashtra is a leading State in agriculture. Principal crops grown in the State are rice, jawar, bajra, wheat, tur, mung, urad, gram, and other pulses. The State is a major producer of oilseeds. Groundnut, sunflower, soybean are the major oilseed crops. The important cash crops are cotton, sugarcane, turmeric, and vegetables. The state is the pioneer in onion production in the country. It is today emerging as an important horticultural State in the country. Different types of soil, diverse agro-climatic conditions, adequate technical manpower, well-developed communication facilities, an increasing trend in drip irrigation, greenhouse, use of cool chain facilities, and vibrant farmer organization offer wide opportunities to grow different horticultural crops in the State. Best quality grapes produced in the State are now exported to other countries. Mango, particularly 'Alphanso', grown in Konkan, has already established a name in the international market.

The major production clusters of Maharashtra are as given below:

Market linkage is currently the responsibility of the Maharashtra State Agricultural Marketing Board (MSAMB). However, its focus is more on fresh and primary processed products. The food-processing sector needs special attention for establishing sustainable market linkages, and MSAMB will also give a specific focus to providing direct marketing linkages to the processing industry. The farm to processor to market linkages are well established in the dairy sector in some parts of the State but not in others. In these areas, and also in respect of the poultry, meat, and fisheries industries where such linkages are largely missing, a similar focus will be given through nodal agencies under the Animal Husbandry, Dairy Development and Fisheries Department.

Maharashtra has the following marketing facilities in the state:

Food processing industries in Maharashtra consists of very basic processing. The main processing industries in the State are in the sectors of sugar, milk, poultry, rice mill, flour mill, meat, edible oil, vanaspati, fruit and vegetable units, milk processing units, etc. There exist immense opportunities for modernizing food processing units in the State. Rice, wheat, soybean, jawar, grapes, pomegranates, and mangoes are the main crops that are available in the State for a primary and secondary process. Similarly, there is a vast potential for development and setting up processing units for tomatoes, onion, cabbage, okra, and cauliflower. In particular, fruit juice pulp and concentrated units, winery, distillery, pickles, rice mill, flour mill, dal mill, soybean extraction, and refining units, etc. can be set up in the industrial areas of the State.

Maharashtra is host to more than 10,000 companies in the food processing sector with a number of multinational companies having their production facilities. Also, some of the famous food processing clusters include: