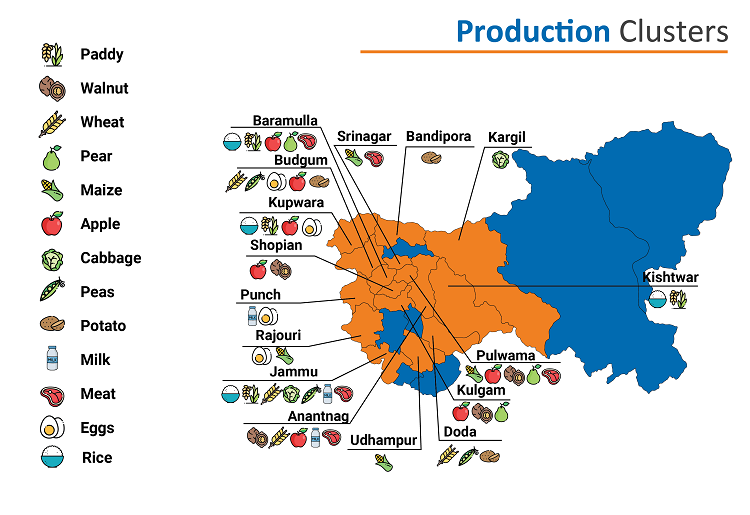 The state of Jammu and Kashmir lies in the western Himalayas. It is India’s northernmost state, covering an area of 2,22,236 sq. km. It lies between Latitude 32°17’N and 37°05’N and longitude 72°31’E and 80°20’E. The state is bounded on the north by Afghanistan and China, on the east by China, on the south by Himachal Pradesh and Punjab states in India, and on the west by Pakistan. The state has a large variation in its own topography. It has a hilly terrain with high mountains and a number of valleys in all regions except the extreme southwestern part was lying plain area of low elevation. Topographically the whole region is almost mountainous with four main ranges of Himalayas; Karakoram, Zanskar, Ladakh, and Pir Panjal. Karakoram and Kyunlun ranges lie to the north and northeast of the state and separate it from Russian, Turkistan, and Tibet.

Jammu and Kashmir is a predominantly agrarian state with agriculture contributing 8% to the state’s GDP in 2014-15 The Horticulture sector plays an important role in the state and contributes significantly to the state economy.

The state has favorable agro-climatic conditions with three such zones favoring cultivation of a multitude of crops, vegetables, and fruits round the year:

Jammu and Kashmir offer good scope for the cultivation of horticultural crops, covering a variety of temperate fruits such as Apple, Peach, Pear, Plum, Apricot, Almond, Cherry, Walnut, and sub-tropical fruits such as Mango, Guava, Citrus, Litchi, Phalsa, and Berry.

Some of the key production highlights of the state include:

The major production clusters in Jammu and Kashmir include:

As per the Annual Survey of Industries 2014-15, there are 162 registered food processing units in the state. Krishak Bazars are being set up in each of the 341 blocks.

Agricultural markets in Jammu and Kashmir